Where we put children first

While this is Reed’s first production, filmmaking is something she has been involved in for as long as she can remember.

“I’ve always been making videos. When I was 8-years-old, we had a clunky, 8-megapixel camera and I would make videos of my family - no scripting or anything,” Reed said. “I would just tell them what to say. I even made videos of our family vacations to Wyoming.”

When Reed was in elementary school, her family moved from Denver to Centennial, Colorado, which is where her interest in film began. She made short videos for fun and her mom would post them to Facebook for family and friends to see. Shortly before she began high school her family moved to Georgetown, Texas.

Reed began to pursue filmmaking the summer before her junior year.

“I took an Analysis of Visual Media Class at GHS, where we learned all about movies and it was the best thing ever,” Reed said. “That’s how I learned to make videos with a plan and purpose, to know the meaning of shapes and colors, the importance of storytelling, and so much more.”

This is what sparked her interest in short films.

When she began her junior year, Reed enrolled in a Capstone class. Students begin by writing a proposal for their project; they then move on to creating a timeline for their project in order to manage their schedule. This timeline is comprised of due dates that will be graded by the Capstone instructor. Reed wanted to pursue a short film.

While brainstorming for her short film, Reed drew from the advice of her favorite storytellers.

“I began to watch interviews of Quentin Tarantino online,” Reed said. “One of the things he suggested about filmmaking is that every movie revolves around a one-word premise.”

When thinking about a concept, Reed applied this ‘one-word’ premise to her film.

“I started with the word competition and I know the competition well within the class ranking system,” Reed said. “Every day no matter what you do, you’re always shifting rank.”

The school ranking system was all too familiar to Reed. Ever since "Ranked," I have strived not to share my current rank with my peers as to not feed into the competition of the class ranking system. The synopsis of the film includes two students, “#15” and “#9,” who befriend each other and begin using unconventional studying methods as “#15” constantly tries to improve her rank.

“Ranked” also shows just how far some students are willing to go to reach the coveted #1 position. Reed took the everyday anxiety that students face and brought it to life.

“Grades are important, but doing dishonest things to get higher grades, or maybe just obsessing over them isn’t good at all,” Reed said.“I want students to know that defining yourself by a number isn’t a healthy way to go through these four years of your life.”

It is important to Reed that students look beyond their class rank.

“I want to encourage other students to find value in other outlets, like art or music,” Reed said. “Remember to be confident in yourself and value what you have been able to accomplish instead of focusing on societal constructs. Use your talents and remember your hard work!”

Reed used her talents to complete so much more than just a capstone project, and she’s thankful for the learning experience.

“Instead of doing just a capstone project to fulfill the requirement of the class, I took it further,” Reed said. “Mr. [Wes] Collman is the most amazing capstone teacher ever. He lets students do their own thing but still holds us accountable. He’s been very supportive of my project.”

Reed and crew produced the film during the 2018 fall break. The entire cast and crew attend Georgetown High School, and it was up to Reed to recruit and screen potential talent. Needless to say, this was an entirely student-run production from talent, to film, to sound, to editing. Additionally, the majority of the film took place on a Georgetown ISD Campus during the break.

“Mr. Collman helped me a lot,” Reed said. “He made sure the buildings were open during fall break and helped me carry my equipment in. He even starred as a teacher in one of the scenes!”

“The actresses did an amazing job portraying the anxiety we feel every day,” Reed said. “I want to say a big thanks to Mr. Collman, Ross, Kim, Gabrielle, and Wendy. I think we only had three to four days off during the break and every filming day was three hours at a minimum.”

It’s through this capstone course that Reed is able to pursue her dream of filmmaking.

“It has been a great learning experience for me,” Reed said. “I was responsible for making the film poster, creating a press kit, and writing the press release. And now, I’m working on creating my own business cards.”

“Ranked” was recently accepted into Georgetown’s first GTX Film Festival. “Ranked” and other student short films will be shown at the GTX Film Festival April 6 from 10 a.m. to noon on screen 2. A Q&A will follow the features and students will be there to answer questions. 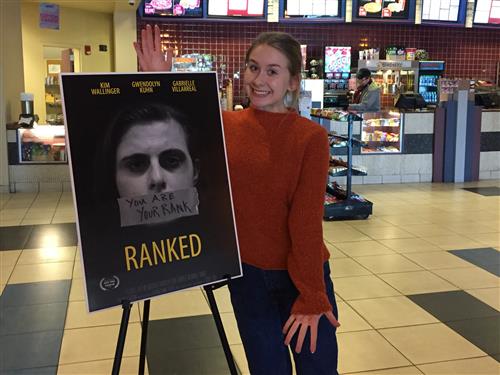 Reed intends to enter the film in more festivals, like the All-American High School Student Festival in New York as well as the Austin Film Festival in the student category.

In addition to filmmaking, Ashlee is involved in archery, UIL Journalism, and President of the Serteens Club.

Reed also intends to complete another capstone project next year. She wants to continue to focus on storytelling through film.

After she graduates from Georgetown High School, Reed intends to apply to the University of Texas at Austin, as well as the University of Southern California and New York University's Tisch School of Arts. She plans to major in film and continue making short- and feature-length films.

“I have learned so much from this process,” Reed said. “Even when I get a little flustered about my own class rank, my friends will ask me what my own film taught me. I hope this helps other students as well - it’s something we all can relate to.”